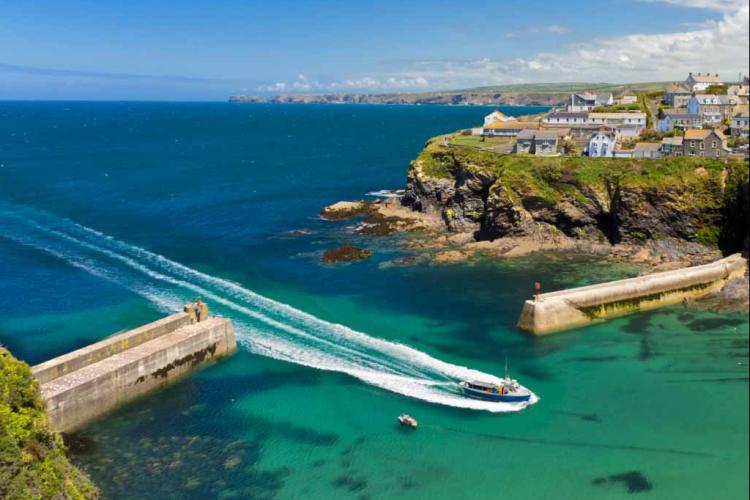 The critic’s reviews are in and Fisherman’s Friends looks set to be one of the ‘feel-good films’ of the year.

Maybe it’s on your watch list, or perhaps it’s inspired your holiday trip to Cornwall.  If you’ve been left motivated, take a look at our picture-perfect guide to the local filming locations where Port Isaac is definitely the biggest star.

Tucked away on the North Coast, just a short hop from Sands Resort Hotel and Spa, you’ll find the tourist hot spot of Port Isaac.

Many viewers across the globe are already familiar with Port Isaac (masquerading under the name Port Wenn), as the setting for the TV series Doc Martin, starring Martin Clunes. The village now takes centre stage in all its glory and charm as the home of The Fishermen’s Friends movie.

With a vibrant local community, the film makes it abundantly clear to visitors, that only the brave venture to take their cars through the winding, narrow streets of the port.

A visit is best done on foot, leaving the car at the top car park.  It’s worth the walk with the picturesque village lined with whitewashed cottages or you can head down further to the sea wall and harbour to witness the buzz of the daily catch being landed by fishermen.  Of course fresh fish is the order of the day, so treat yourself to mackerel, crab or lobster - whatever you choose it will be some of the freshest food you’ll ever eat.

If it’s fresh fish you are looking for, another of the filming locations is the yard at Just Shellfish.  Scene of many a Fisherman’s Friends chat, here you can buy and order fish directly from one of the original band members (and their family).  Fisherman Jeremy Brown runs the family business, catching crab and lobster with his son Tom, this is then cooked and picked by the "glamorous Crabbie girls" which include Liz and Lisa (Jeremy's wife and daughter).

It’s Tom’s boat Maverick that also takes a starring role in the film, and although you can’t go aboard as it is a working vessel, you might see it moored up and bobbing around at the end of the day.

If you are keen to get out on the water, Jeremy runs trips out of Port Isaac on their rigid inflatable where they say: “You'll get to see Port Isaac and the surrounding area from a unique perspective, enjoy the marine wildlife, take in a bit of history and appreciate the rugged coastline.”  You can’t say fairer than that.

Much of the action (and laughter) takes place in the Golden Lion, but fear not, here’s where the film delves into a little bit of fiction!

The Golden Lion pub is certainly not struggling, that can be put down to a little bit of artistic licence.  As you can imagine as the pub at the heart of not only the village, the film and also Doc Martin, it’s a hit and more than a little busy on a summer's day.  And who’d be surprised by that, it’s unrivalled view over the harbour is only matched by its character making the most of all its 18th Century charm.

An extra fact (not featured in the film) is that The Golden Lion also boasts its own smugglers tunnel leading down to a causeway by the beach.   As you can imagine as well as the odd sing-song, there are more than a few seafaring tales doing the rounds as you settle in for a few hours by the open fire.  Don’t believe the film, there’s much more to drink than rum and Tribute - but it you want to make your visit authentic why not order a pint or two of Proper Job.

The eagle-eyed among you will spot the Fisherman’s Friends original members sat during the pub quiz, and top local chef Nathan Outlaw, (whose self-titled two Michelin star restaurant is in Port Isaac) also make a cameo.
Don’t forget as well as stunning views, there’s also a range of scrumptious meals on offer too, just remember not to park on the quay.

We’ve got a lot of beautiful churches in Cornwall, each one with its own charm and appeal.  But as The Fisherman’s Friends recorded one of their albums in this church it was only fair that it got to appear in the film.

Tranquil with a huge sense of calm, the church of St James the Great is actually dedicated to two saints, which makes it pretty special in the first place.  The medieval church has many architectural gems to spot including a recently restored stained glass window that dates back to the 15th century.  Take some time for reflection on your busy and bustling holiday in Cornwall while you wander the church yard, or if you’re lucky you can join in one of the ‘Parish parties’ every third Sunday of the month.

Port Gaverne (pronounced gay-verne) is Port Isaacs neighbour and so also plays a part in the film as a perfect spot for stone skimming.  It’s also fantastic for rock pools so you’ll find it a hit with families and as the tide goes out there’s plenty of sand to play on.  Owned by the National Trust it too used to be a thriving port with an abundance of pilchards and slate and coal landing. Now you’ll find a welcoming pub but very limited parking.  The once thriving village is now mainly a collection of holiday homes.

Another bit of artistic license again here folks, the beautiful house of Pencarrow does not belong to Charles Montague and that's good news for visitors.  In fact, it belongs to the rather friendly Molesworth-St Aubyns family and has done for the past 500 years. What’s more it’s open to the public, so those beautiful gardens and house shown in the wedding scene are actually there to be explored and enjoyed.

You’ll find the Georgian gem tucked away on the edge of Bodmin Moor, and it offers plenty to do.  As well as Grade II listed gardens it also has an Iron Age fort, children’s play area, café and, of course, a gift shop.

Step away from the Fisherman’s Friends experience and delve more into Cornish history with a guided tour where you can really get to know the secrets of this ancient family home. With hidden passageways, statues sporting top hats and portraits with eyes that follow you, Pencarrow is not your usual country home!

The house, cafe and shop re-opens to the public on March 31 and is open Sunday to Thursday. The gardens are open every day from 10am to 5.30pm until October 31.

The Fisherman’s Friends can be seen performing in Port Isaac every Friday throughout the summer for charity. For more details see thefishermansfriends.com

Published within the category of Best Days Out and tagged with film_locations, cornwall, Port_Isaac,